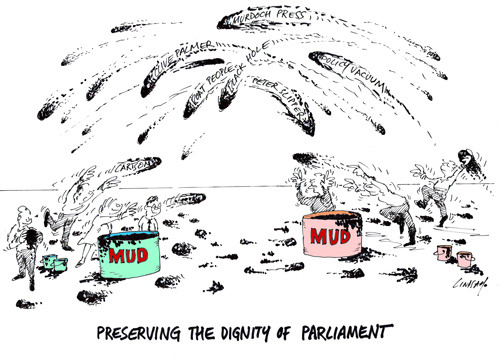 John Howard gave us the “non-core promise”. Now Tony Abbott has added a new category to the hierarchy of political commitment with his “pledge in blood” to repeal the carbon tax, which passed the lower house of Parliament yesterday (unless, of course, that was just an “unscripted remark” made “in the heat of verbal combat”.)

Abbott’s hyperbole has certainly attracted the headlines, but it betrays a curious tactic. By using such uncompromising rhetoric, Abbott has left himself no room to move if repealing the nascent scheme becomes legally impossible or popularly unpalatable.

No amount of blood-pledging, pinkie-swearing, or scout’s-honouring will change the constitutional and political obstacles that an Abbott government would face if it tried to repeal (what will soon be) the Clean Energy Act and its 18 associated acts of Parliament.

Starting with the basics:

If an Abbott-led Coalition were to form government after the next election (expected to be held in 2013, about one year after the carbon price scheme will have started), it would only be able to repeal the scheme immediately if it (a) controls the Senate as well or (b) obtains the support of either the Labor opposition or whoever holds the balance of power in the Senate.

It is unlikely that the Coalition will control the Senate after the next election (which will include only a half-senate election as usual); a more likely scenario is that the Greens will retain the balance of power.  This would mean an Abbott government would need their support, or the support of Labor, to pass the scheme.

Let’s make the reasonable assumption that such support will not be forthcoming (Bob Brown has given a “rolled-gold guarantee” that the Greens will vote against any attempts to repeal the carbon price,* though Labor’s position on anything that far in advance is admittedly unpredictable). In that case, Abbott has said he would call a double dissolution election — by which both houses of Parliament are dissolved in full — in the hope of getting the number of seats needed to ram the changes through.

But the Constitution litters Abbott’s pathway to a double dissolution with speed bumps. To yield a double dissolution trigger, Abbott’s repealing legislation would need to be rejected twice by the post-2013-election Senate.  Assuming the next election is held in the second half of 2013, he would need to wait until after the new Senators take office on July 1, 2014 to introduce the repealing legislation the first time. As Matt Grudnoff has pointed out, taking into account the constitutionally mandated minimum three-month period that the House of Representative must wait between submitting the same piece of legislation to the Senate, along with the time soaked up by expected Senate inquiries into each repealing bill, it would likely take until at least early 2015 before a double dissolution election could be called.

If, following the double dissolution election, an Abbott-led coalition won the numbers needed to pass the repealing legislation (on the separate sitting of both houses or via the “joint sitting” option that would become available), it would then be at least mid-2015 before Abbott’s repealing legislation could be passed into law.

Then there are the vexed logistics of dismantling an already-functioning (in full-fledged emissions trading mode by July 1, 2015) market mechanism under which billions of dollars worth of property rights, in the form of carbon units, have been issued by the government and are held by private entities.

I am not as convinced as some are that repealing the scheme and cancelling the associated property rights would necessarily amount to a constitutional “acquisition of property” (think The Castle)requiring the payment of compensation “on just terms” to holders of carbon units (the law on property acquisitions by the Commonwealth, especially in cases involving statutory forms of property, is complex and uncertain — more on this issue in a subsequent post). What we can say with certainty is that any attempt to repeal the legislation and cancel those rights will result in political bedlam and protracted legal battles.

In sum, an Abbott-led government may eventually be able to wind back the carbon scheme, but it will probably take a mighty long time. Whether or not it would cost his government billions of dollars in compensation to do so is more likely to be resolved by the High Court’s ink than by Tony Abbott’s blood.

*It is not clear whether a “rolled-gold guarantee” trumps a “blood pledge” in the lexical hierarchy of political intention.

Climate change and firefighting: a voice from the front line – by FBEU State Secretary, Jim Casey As a firefighter, I can tell you things are not the way they used to [...more]

#Moments
🎸More than just a trendy LP to play, this is the original Sgt Peppers record that my mum and dad had in their vinyl collection growing up in working class Sydney in the 70s, played back then on a 1071 AWA B92 turntable cabinet.
Lots of energy in the ocean today. Finding a spot to surf is tricky. 🌊
With Kate and Brock doing van life in Victoria, I got to spend my #NYE2022 with these buddies. Was great to have Jade and Ollie close.
#merrychristmas🎄
The heat is on. 🎣
This…. 🎣🍻
This is a cuttlebone. It comes from a cuttlefish.
Recovery
Surf check
Met up with Jason McManus yesterday at Shell Cove Marina. Looking well in retirement. What a boat!
Sun going down, threw out a top lure with my 1-4kg #Daiwa Infeet with matching Luvias 2500D, nek minit, boom - solid whiting first cast.