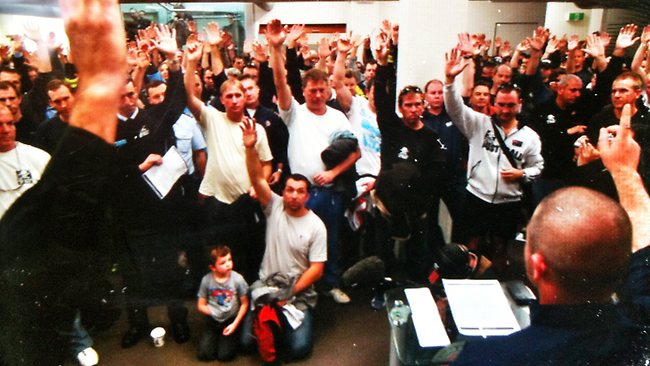 USE OF THE WORD COMRADE
By Darin Sullivan

The following is an update on an article I wrote for the NSW Fire Brigade Employees’ Union / FBEU Journal (NSW Firefighter) in 2007.

Firefighters and union members often hear the word ‘Comrade’. Some use the term with pride, others cringe when they hear it and think it is old fashioned. The term  ‘comrade’ gets a bit of a bad wrap these days and does have wider and more positive meanings.

Definitions of comrade
Wikipedia defines the term comrade as: used to mean “friend”, “mate”, “colleague”, or “ally”, and derives from the Iberian Romance language term camarada,[1] literally meaning “chamber mate”, from Latincamera “chamber” or “room”.[2] A political use of the term was inspired by the French Revolution, after which it grew into a form of address between socialists and workers. Ever since the Russian revolution, popular media in the Western World have often associated it with Communism..

The term comes from the French ‘camarade’, which in Old French translated to roommate. This came from the Old Spanish word camarada, meaning much the same thing as the French version but especially related to companions in a barracks. Camarada was derived from camara for room, which originally was the Late Latin word for chamber.

The first recorded entry of it’s use into the English language was in the 1500s.
The word comrade does not originate from the Russian language, as many people believe and clearly does not have to be confined to communism.

The word ‘comrade’ relates to us as firefighters and Australian workers in many ways, but also within the Trade Union movement.

At our FBEU 1996 Annual General Meeting (22/11/96), debate on this issue was included on the agenda. The motion which was carried at that meeting was as follows:

That the undated members’ correspondence questioning the Union’s use of the term comrade and proposing that the Union instead revert to the use of the terms brother or sister, as the case may be, be received, and that this meeting confirm as policy this Union’s adoption of the use of the fraternal address of comrade due to it being standing ACTU and NSW Labor Council policy, its gender neutrality and primarily, it being considered the most appropriate fraternal term for union members generally, and firefighters particularly, due to its most literally accepted meaning of ‘a fellow, mate or equal in work or play or fighting’.”

So the term ‘comrade’ has been well debated and accepted as policy within the FBEU, and this serves as an interesting historical look as to why many FBEU members use the term.

As firefighters we share a rare camaraderie. We work together, we cook, eat and sleep together. This closeness manifests itself into a family that is recognized worldwide. As a collective, a group of members belonging to the same trade union, we share a strong need to protect each other and “the family”, possibly more than any other type of Union. In referring to our brothers and sisters using the term “comrade” many of us believe that we are bestowing a respect only possible to give to those who you would give all to protect.

This is the reason you may hear your work mates and union officials use the term ‘comrade’. We do so to protect and maintain tradition, to apply our democratic Union policy and use of a term that is non-gender specific (ie Brother) and as a show of pride and strength.

So next time you hear the phrase “comrade”, don’t think that you are being conditioned to communism – that’s an inaccurate and unfair generalisation fed to society by right wing media. Appreciate that you are being referred to as a friend, ally, as a brother or sister – by someone who stands side by side with you, no matter what side of politics you believe in.

Hopefully by explaining some of the history about the origins of the term ‘comrade’ can help people feel better about using it.

by Darin Sullivan in Events

Dear Mo, It’s time to say goodbye. We’ve been together for a month now, and we’ve been through a lot. We started out as a couple of Mo Bros hanging out to raise money [...more]

🎸More than just a trendy LP to play, this is the original Sgt Peppers record that my mum and dad had in their vinyl collection growing up in working class Sydney in the 70s, played back then on a 1071 AWA B92 turntable cabinet.
Lots of energy in the ocean today. Finding a spot to surf is tricky. 🌊
With Kate and Brock doing van life in Victoria, I got to spend my #NYE2022 with these buddies. Was great to have Jade and Ollie close.
#merrychristmas🎄
The heat is on. 🎣
This…. 🎣🍻
This is a cuttlebone. It comes from a cuttlefish.
Recovery
Surf check
Met up with Jason McManus yesterday at Shell Cove Marina. Looking well in retirement. What a boat!
Sun going down, threw out a top lure with my 1-4kg #Daiwa Infeet with matching Luvias 2500D, nek minit, boom - solid whiting first cast.
A guide to resuscitation, oz-style.