WorkCover work travel claims for all but police officers should be abolished, medical expenses capped and benefits reduced after 13 weeks, a parliamentary committee report into the blown-out NSW compensation scheme says.

The state government is now considering the 28 recommendations stemming from its WorkCover inquiry, tabled just hours after thousands of workers marched on parliament in protest at a push to rein in the scheme’s $4.1 billion deficit.

After reviewing recommendations of a government discussion paper suggesting massive cuts to workers compensation, the committee said claims from workers injured travelling to or from work, except for police, should be abolished.

It called for the introduction of a Victorian-styled step-down of benefits to 95 per cent of pre-injury earnings in the first 13 weeks, to 80 per cent from 14 weeks onwards – replacing the current system of a 100 per cent payout for 26 weeks.

Time caps should be placed on weekly benefits for the less seriously injured and those in an intermediate category of injured workers, but not on the most seriously hurt, the committee said.

Entitlements for nervous shock to family members of people injured or killed on the job should also be scrapped, while the committee supported a cap on “reasonable and necessary” medical expenses whilst weekly benefits are paid and for a year afterwards.

However, committee chair Robert Borsak said another parliamentary committee should be established to conduct a thorough review of WorkCover. The current inquiry had been given just two months to examine the scheme.

“A strong message coming out of the inquiry is that immediate reform is needed to respond to the dire financial position of the scheme,” Mr Borsak, a Shooters Party MP, said.

“The committee has had regard to evidence that a benefit restructure will deliver cost savings, which are necessary to ensure that the scheme is able to continue to meet its key objectives of promoting better health outcomes and return to work for injured workers.”

A regular review of WorkCover by an independent body was also recommended by the committee.

The government wants reforms to workers compensation passed through parliament in coming weeks, with NSW Premier Barry O’Farrell telling MPs they can’t break for the winter recess until the new laws are in place.

Speaking in parliament before the release of the report, Mr O’Farrell said reform of WorkCover was “not about being heartless, it’s not about ripping money out of a scheme”.

Without change, premiums would rise by 28 per cent, he again warned.

Unions NSW, who have argued the WorkCover overhaul was an excuse to cut benefits to injured workers, said the committee’s recommendations would force people back to work before they were ready.

“These recommendations overturn the basic principle of our workers compensation system, looking after sick and injured workers and helping them get back to work when they have recovered,” Unions NSW Secretary Mark Lennon said.

“The O’Farrell Government set up a hatchet committee to take the axe to workers’ rights in NSW, and that’s exactly what has been delivered,” Mr Shoebridge said. 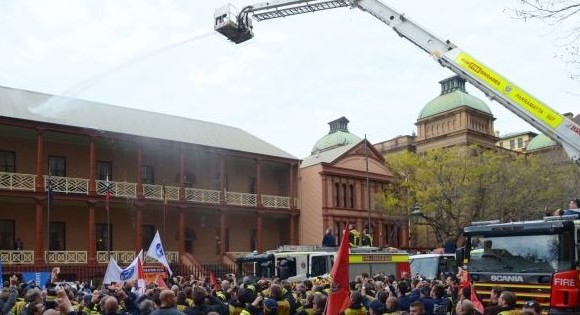