Australian unionism remains strong, despite relentless corporate and government attacks on the living standards and rights of workers to unionise and struggle over our interests. Campaigning militants are in struggle and in organising union structures. Progressive ACTU policy emerged at the 2012 Congress with new leaders Dave Oliver Secretary former metal worker and Ged Kearney President former nurse and a capacity of union members to protest against right-wing attacks. But there are limitations and weaknesses.

Union membership remains historically low at 17% so the past ACTU organising strategies based on the US model are not successful. Casualisation is the curse, very high as explained in the ACTU’s recent publication “Lives on Hold”.

One way of looking at unionism is through 3 dimensions 1. corporate/government unionism, 2. community unionism and 3. class unionism.

I argue Australian union members and union leaders need to build more action on class unionism for survival and advancement. Most unions at different times display strengths in the 3 dimensions.

Under 1 unions act only in their own interests within the labour market.

The corporation/government CEO/Human Resource management disciplines work and workers daily, ruling and determining the boundaries of their unions. Like the US, corporate and government strategies ensures non-unionism or passive unionism. Right-wing conservative business unions are integrated into and support their enterprise. Public sector workers suffer under the repression of anti-union government employers. Unions are incorporated into management control and legal dominance.

But also some strong unionism under the corporate sector and government system survives with enterprise bargaining of 4% annually with a limited right to strike, a national annual minimum wage and some good winning union campaigns.

Unions successfully campaign and negotiate with the Labor Gillard government for gains for members – many don’t. Politically, ‘Laborism’ historically dominant still prevails. This is despite the political crisis in the government with very low polls and an election is in 2013 likely to be won by Opposition leader Abbott using ‘Republican’ style attacks.

Unions have to accept minor government reforms for working families, such as the so-called Fair Work Act that has many shortcomings such as retaining the extremely prescriptive legal repression of workers and unions who want to exercise the right to strike.

The Australian political system is different in details to the US and unions but also there are similarities – indeed our right wing party misnamed ‘Liberal’ takes the same extreme politics as US Republicans, with the same removal of rights and defeat of workers and employees organising with union principles and backed by powerful internal corporate interests, with increasing war with China tension as the US turns Australia into a base.

In 2, unions advance as well members’ interests for social justice. Social unionism with actions with community alliances and support in civil society campaigns for the defence and advancement of members. Past community/union organising practice, from the MUA Here to Stay struggle, the Rights at Work election campaign, the Equal Pay campaign, and winning social justice actions shows progress. Yet, in many instances constant union rallies with community support have little impact on strong opposition from the corporate bosses.

In 3, class unionism is the struggle between labour and capital. Unions employ the militant response inside the corporate/government prism and social unionism but with winning strike action and act across the broad working class or in US the middle classes – and with workers control and left socialist politics mobilising against the ruling class.

Unionism with class understanding knows the crisis in world capitalism and the environment is severe for the working classes, and knows the 1% corporate rulers and right-wing politicians relentless attack is a ruling class offensive.

Daily, workers I argue should respond and organise in reply for a united stand across industries, occupations, communities, nationally and critically, internationally – workers of the world unite.

Class unionism organises a class response and strategy, necessary to be organised by workers for strikes and solidarity, and workers control and with left socialist politics. I argue this class response is sorely needed, but lacking.

For further debate. As a unionist what can you do to collectively develop class unionism?

This schema of unionism is taken from the opening chapter of Richard Hyman’s analysis in his book “Understanding European Trade Unionism Between Market, Class and Society.” 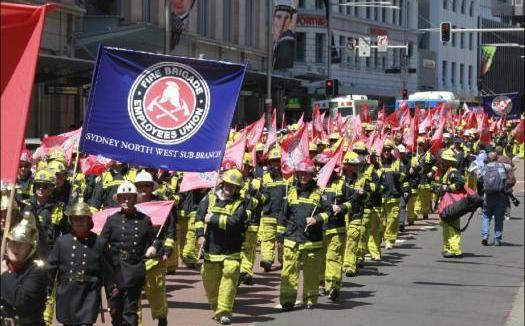 Kicking against the Pricks

This piece was written by a friend and Comrade of mine, Darryl Snow, some years ago for the FBEU quarterly magazine when he was FBEU President. Like me, Darryl was also [...more]

Spring surf season 🌊
Afternoon walk #Kiama
Shout out to Phil Byrne and his boys at #ByrneSurf, Thirroul. Phil’s being shaping my boards for 25 years, and their service has never been better.
#Kiama blowhole at the tail end of this August storm cell. #NSWweather #storm
Still in the game 🌊
Great day for a ride
Before the storm 🌊
Surf’s up at #Kiama #NSW
Milton to Mt Kingiman on #eMTB
The cool room
#Minnamurra #NSW
The last of the swell. 🌊