A busy inner-Sydney street is in lockdown and homes and businesses have been evacuated after a fire erupted at a service station.

Gas-fuelled flames shot from the site in King Street, Newtown, near the corner of Alice Street.

The fire has been extinguished and a utility company was on site surveying the damage and securing the gas tanks.

NSW Fire and Rescue Superintendent Tom Cooper said earlier that crews were trying to contain the blaze, and were concerned about four 300-kilogram cylinders of LPG gas. A 150-metre radius exclusion zone was in place.

“One cylinder has caught fire and the heat has caused the one next to it to vent,” Superintendent Cooper said.

Firefighters stand by as gas bottles in a service station are doused with water to prevent an explosion on King Street. Photo: Fire and Rescue NSW

The fire caused damage to the service station and Newtown Garden Market, which is next door.

Gas bottles in a service station are doused with water to prevent an explosion on King Street. Photo: Dallas Kilponen

Firefighters from five stations were at the site.

Firefighters would probably spend the next three or four hours fighting the blaze, he said, meaning the busy thoroughfare could reopen just before peak hour.

Buses were also being diverted and delayed, with drivers forced to miss some stops.

Mr Cooper said there was no evidence of a link between the Newtown fire and a blaze earlier this month involving several 200-kilogram LPG cylinders that caught alight at a BP service station at Hoxton Park in Sydney’s west. 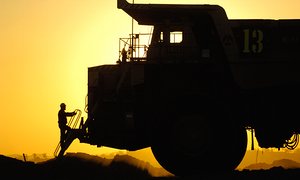