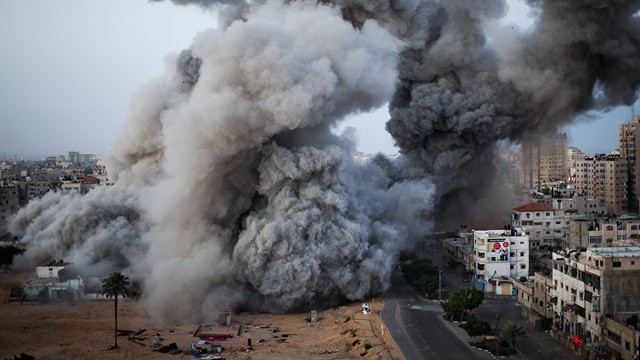 On a day when Palestine continues to fire rockets across the border, Israel continues to relentlessly and mercilessly bomb Gaza into the earth, while the death toll continues to rise on both sides during this latest conflict (1000 Palestinians : 44 Israelis), one can only feel helpless and sad at the futility of a war that appears to have no end.

Here in Australia many of us sit safely with our families by our side in homes safe from terror. Meanwhile, in many parts of the world ordinary people don’t know if their children, or their entire families, will survive the next day. But what to do about all this?

I sought advice from music tonight, and came across one of U2’s most overtly political songs – Sunday Bloody Sunday.

While it was originally a tribute to the story of British troops opening fire on unarmed and peaceful civilians in Derry, Ireland during a civil rights march in 1972, it’s become an anthem for an anti-sectarian anti-violence signature message.

We kill each other over land, over religion, and over any reason we can find. Regardless of the reasons, the history, the rights and wrongs, none of that changes the fact that tonight children will be killed in their homes, in hospitals, and in schools tomorrow. Ordinary people will be killed in the hundreds while we lay sleeping tonight…

The problem remains the need for Israeli-Palestinian coexistence, which currently sees Israel putting the Palestinians under suffocating military occupation while Palestinian militant groups terrorize Israelis. Like I asked on my web site, where to from here?

From what I have read, there are three ways the conflict could end. Only one of them is both viable and peaceful — the two-state solution — but it is also extremely difficult, and the more time goes on the harder it gets.

One-state solution: The first is to erase the borders and put Israelis and Palestinians together into one equal, pluralistic state, called the “one-state solution.” Very few people think this could be viable for the simple reason of demographics; Arabs would very soon outnumber Jews. After generations of feeling disenfranchised and persecuted by Israel, the Arab majority would almost certainly vote to dismantle everything that makes Israel a Jewish state. Israelis, after everything they’ve done to finally achieve a Jewish state after thousands of years of their own persecution, would never surrender that state and willingly become a minority among a population they see as hostile.

Destruction of one side: The second way this could end is with one side outright vanquishing the other, in what would certainly be a catastrophic abuse of human rights. This is the option preferred by extremists such as Hamas and far-right Israeli settlers. In the Palestinian extremist version, Israel is abolished and replaced with a single Palestinian state; Jews become a minority, most likely replacing today’s conflict with an inverse conflict. In the Israeli extremist version, Israel annexes the West Bank and Gaza entirely, either turning Palestinians into second-class citizens in the manner of apartheid South Africa or expelling them en masse.

Two-state solution: The third option is for both Israelis and Palestinians to have their own independent states; that’s called the “two-state solution” and it’s advocated by most everyone as the only option that would create long-term peace. But it requires working out lots of details so thorny and difficult that it’s not clear if it will, or can, happen. Eventually, the conflict will have dragged on for so long that this solution will become impossible.

It will take both sides to compromise.

How to save Gaza

Hamas has pressed on, daring Israel to go further. Israel has unwisely accepted the dare.

Israel’s war on Gaza is as much about oppression as it is about public relations, and winning the propaganda battle.

Beyond Ceasefire: Ending the blockade of Gaza

In this briefing note Oxfam sets out practical recommendations to better protect civilians on both sides from violence and to finally achieve an end to the collective punishment of Gaza’s 1.6 million residents, while addressing Israel’s security concerns. These are necessary steps towards lasting peace in the region and the creation of a viable Palestinian state alongside Israel.

At this time, words become important but insufficient. We encourage all our members and supporters to speak out and write letters where possible. Contact Foreign Minister Julie Bishop, Prime Minister Tony Abbott, and the Israeli Ambassador in Australia, asking them to pressure the Israeli, Hamas and Egyptian authorities. – See more at: http://www.ajds.org.au/statement-gaza-july-2014/#sthash.SeyvV1gS.dpuf