Cessnock City Council will ask the NSW Fire Commissioner Greg Mullins to explain how cutbacks to four of Cessnock’s eight fire stations will benefit the community.

The council will request Mr Mullins to front up to the Cessnock chambers on September 5.

“We want the commissioner to explain why our fire stations are being effectively closed,” Cr James Ryan said.

“‘It was alarming to hear a presentation from firefighters at Wednesday night’s council meeting that four out of Cessnock’s eight fire stations won’t be open [Thursday].”

The call for Mr Mullins to attend the meeting was unanimous among the councillors.

The state government has sought to slash $28 million from the NSW Fire and Rescue budget.

“What makes this action hard to understand is that the fire brigade is primarily funded by a levy on house insurance policies (74 per cent) with only 14 per cent of funding contributed by the NSW government,” Cr Ryan said.

He said when considering the funding breakdown – including 11 per cent from councils – the cuts made no sense.

“Therefore the government’s passion to slash the fire brigade budget will have little impact on the budget of NSW,” he said.

“Its main effect will be to reduce public safety in communities like Cessnock.”

Firefighters made an impassioned plea to councillors on Wednesday night for help to protect the service for the community.

“As we heard, if Cessnock brigade is called out of the area, for example to a major accident along the New England Highway at Singleton, the whole of the Cessnock local government area will be left with little or no coverage by a fire brigade,” Cr Ryan said. 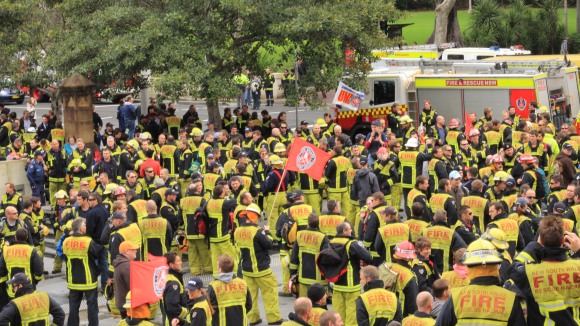