Coal seam gas (CSG) and coal mine plans are becoming major issues in the upcoming New South Wales election on 28 March, as the State Government cancels a string of CSG exploration licenses and delays decisions on controversial new coal mines until after the election. The issues are becoming battles in marginal seats across the state as politicians rush to placate the locals in the face of growing resistance to coal and gas projects. The Government’s “Gas Plan” includes a freeze on processing applications for new CSG exploration licenses, and cancelling dozens of licences for CSG companies, but they’re largely not in areas with major CSG resources. Labor Opposition Leader Luke Foley has promised a state-wide moratorium on CSG (although it granted many of the licences now being revoked) and a full ban in the Northern Rivers region and drinking water catchments, while the Greens want a complete and permanent ban on CSG.  The expansion of coal has been called a “dangerous” political issue, with former NSW Governor Dame Marie Bashir the latest to join the call to save farmland from coal mines.  Battle lines are also being drawn over a $1.2 billion coal mine proposal by China’s Shenhua Watermark Coal, on the edge of the Liverpool plains, threatening the seat of a Nationals MP. The mine has kicked off the “water trigger rule”, causing Federal Environment Minister Greg Hunt to “stop the clock” on the decision. The controversial Wallarah 2 coal mine that the previous NSW Premier Barry O’Farrell promised to stop before the last election, and which Labor has promised now to prevent, has now gained preliminary approval from the Planning Advisory Commission (PAC), but protests are also gearing up there.  The PAC has also approved the extension of a Rio Tinto coal mine in the Hunter Valley, recommending that the entire village of Bulga be relocated. The villagers have responded with a peaceful resistance pledge that has already been signed by more than 2,000 people.  Late last month, a new report put the annual health costs caused by pollution from the Hunter Valley’s five coal-fired power stations and fine particle pollution from the region’s coal mines at more than $600million a year.  Meanwhile, protests continue across the state, with activists continuing to block the forest clearance at the Maules Creek Mine, with more than 40 people arrested in the three week window the company has to clear the forest. A GetUp survey in Manly has shown 96 percent opposition to the expansion of coal or GSG in NSW. 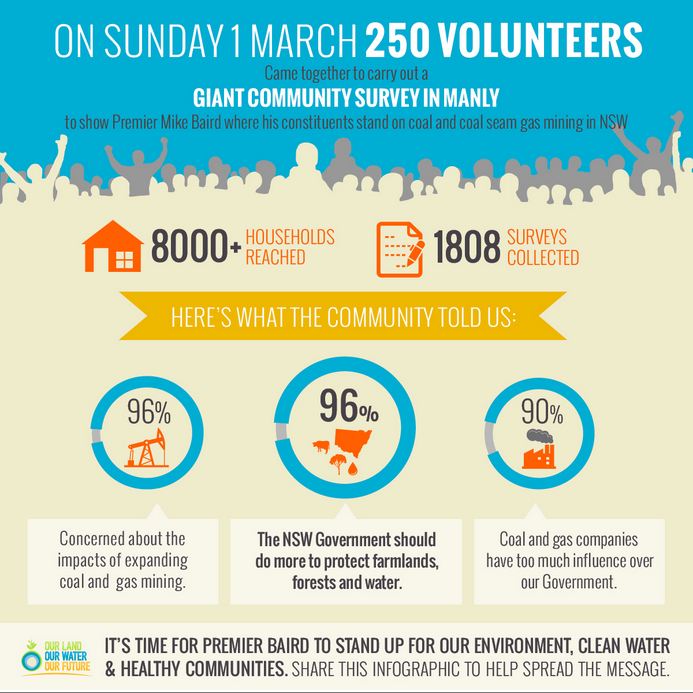 Support content and resources from (and with permission of) TREE ALERTS